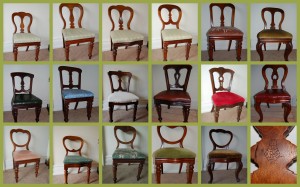 This blog is aimed at raising the profile of James Reilly, a prolific chairmaker, inventor, innovator and entrepreneur in Manchester, England, between 1850-1889.

I became interested in his chairs in 1974 when my wife and I bought a pair in Southampton as we started to build a home together. We found them to be solid yet elegant and pleasing in style.  More chairs were added over the years, as our family grew, and then I began to research Reilly as I became more aware of the range and diversity of his output. The internet has made the exploration easier but it has also revealed how little known he is, not just outside the antique trade, as one would expect, but also within it. This is surprising when one reads in his obituary that “He became one of the largest chair makers in the world, and he practically monopolised the market in chairs made of mahogany.  He was the greatest shipper of these useful articles of furniture….”. (1)

I am not the first to seek to publicize Reilly and his work. In the early 1990s Luke Millar (2) wrote of his patent for bolt-back chair design and Barbara Ferguson followed up with two articles and a dissertation (3, 4, 5). But besides their work he has received only the briefest mention in other articles and so this blog seeks to rectify this neglect.

I hope in the following pages to survey the range of his output and activities so any help in the provision of images or information about him, his life and work  would be greatly valued. One approach is to try to add to my collection of chairs (illustrated above) so that I can provide images and descriptions more fully. News of “orphan” chairs, odd ones or twos in any condition,  looking for a new home will also be gratefully received!

So far I have not located an image of the man himself and that would be much prized.

Paul A. Shutler for directing me to the RFS articles.

Prof. Chris Pickvance for providing copies of the articles in the  Newsletter of the RFS and for enthusiastic support.

Kaye Doherty & colleagues at the Library at the University of Salford.